Hey! Hi! SUP. Yo. You’re reading about a trip that took place 9 months ago (May – June 2015), which means that I am sadly no longer in Central Asia. However, the trip was awesome enough that I feel compelled to write about it in a series of blog posts, because it’s unsurprisingly … kind of difficult to write about three different countries and so many different experiences’ worth of text and consolidate that sucker into one blog entry. Also, I’m likely a) nostalgic, b) itching to travel again, c) guilty about having so many orphaned photos on my HD, or d) all of the above. HERE WE GO.

Only one of two doubly landlocked countries in the world, Uzbekistan had been a mainstay on my travel bucket list for years (ever since it occurred to me that I should keep track of the places I want to visit), and while there’s something satisfying about crossing a destination off your bucket list and visiting a country with so much culture and history to offer, let’s not front: it was one of the hardest countries I’ve ever visited. There are so many barriers (yes, including literal barriers) to entry that it’s nearly impossible to be 100% go-with-the-flow or play-it-by-ear here. Entry visa: The Stans already are scarcely visited compared to other countries, and it doesn’t help that a lot of them require advance visas. The only thing worse than endless paperwork is the paranoia when you mail off your passport to a total stranger for an indefinite amount of time, with no clue whether or not they’ll send it back because you incorrectly filled out your host’s address. Language barrier: I’m a naturally awkward person, even in English, but the quickest and easiest way to make me even more awkward than I already am is to make me play charades in a foreign country because I don’t know the native language. With languages on the Germanic and Romance side of things, I can rely on loose cognates if I’m reading. With countries that have a strong public transportation infrastructure accompanied by intuitive visual cues, like all those subway lines in Tokyo or Seoul, it doesn’t matter if I can’t read a lick of it, because I can rely on signs ev-er-y-where. However, take those two things away from me, and all you have is me looking utterly dumbfounded because I don’t know how to speak any Slavic language, let alone pretend because I can’t even read in Cyrillic. My friend and travel buddy knows Russian, so thankfully I got around just fine (bless her!), but I can safely say that this was by far the worst language barrier I’ve yet to overcome.

Keep track of everything: This sounds like a given, but it’s more than just watching over your purse to make sure you don’t get pickpocketed. Every single night, I had to have some official documentation of where I stayed. Hostel? I needed the official stamp for every night of my visit. Overnight train ride? I had to guard that train ticket stub like it was a national treasure. While this all amounts to a lot of loose scraps of paper in your purse, the border guards actually check all this shit by the time you leave Uzbekistan.

Declare your money: No, really. This is a woefully bureaucratic chore that will atrophy your entire brain, but border guards take it a million times more seriously than you normally would that it makes filing expense reports look like a walk in the park. This actually doesn’t seem like a hard task, if it weren’t for Uzbek soms being so hyperinflated that $200 USD (which covers food + day-to-day tourism costs comfortably for a week) equates to almost 284,000 Uzbek som. 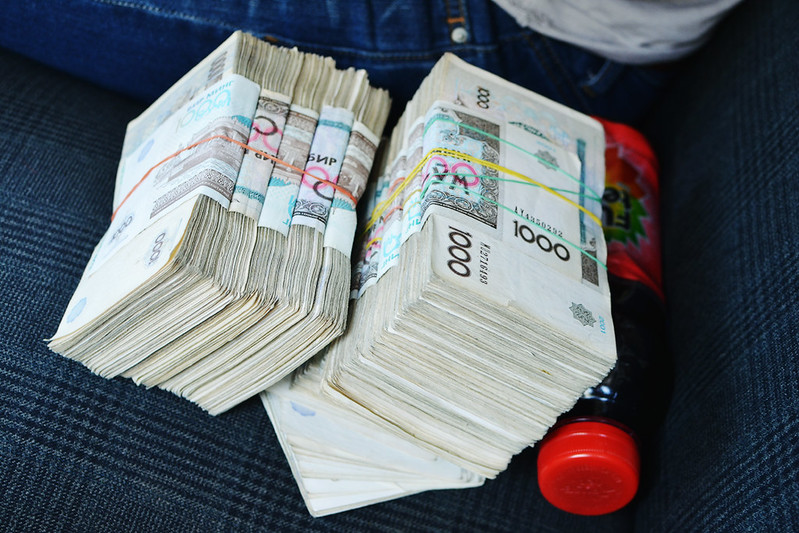 …aka good luck keeping track of those stacks of money.

And yep, border guards actually make you go through the mindnumbing process of declaring all your money. Every last som.

Entering the country: So you got your entry visa. You have enough space in your bag to carry enough stacks of cash to make you feel like you pulled off a successful bank heist. You have space for all your hostel stamps and train ticket stubs. You know some Russian or Uzbek, or are at least cool with faking it. Great! Now prepare to spend three hours chilling at the border. Bonus points if you bring your laptop with you, and they make you open every file on your computer to make sure you’re not carrying porn or anti-Islamic content. Bonus points if you don’t know any Russian or Uzbek, which makes the whole lost-in-translation thing even more hilarious by comparison. And even more bonus points if you manage to do this all at the crack of dawn, in which case you can feel like a total champ by the time you actually step foot in Uzbekistan.

At any rate, I hope my long-winded User’s Guide to Entering Uzbekistan hadn’t scared you off from planning a Central Asia trip, because Uzbekistan has a lot to offer if you’re willing to make all the commitments and jump all the bureaucratic hurdles. You just gotta, well, work for it. Rebekah and I took the land border crossing from Kyrgyzstan to Kazakhstan to Tashkent, went through that aforementioned excruciatingly long border control process, took an overnight train to Bukhara, and made our way from Bukhara to Samarkand to Tashkent. If you want to see all the cultural delights of the Timurid Empire in a logically sound order, I’d recommend this route.

After spending a day in Tashkent getting our bearings, passing GO and collecting our $200 (I mean — going to the bank and collecting 284,000 Uzbek som, cough), we took the overnight train from Tashkent to Bukhara. Nothing too fancy — the cabins were comparable to an economy cabin in a Chinese train. 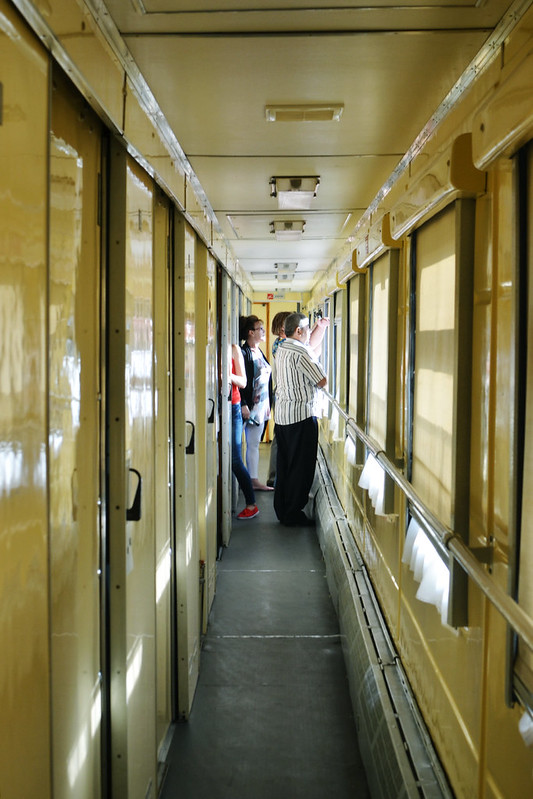 While I’ll ramble more about Tashkent (and Samarkand!) in a later post, I’ll talk more about our “first” stop of the Uzbekistan adventures, Bukhara, which is the embodiment of a medieval city in Central Asia. I mean, come on, the City Centre was designated a UNESCO World Heritage Site, so if you want culture without the incessant crowds, this is the place. Anyway, a bit of history: Bukhara was a major spot on the Silk Road, even though humans have been inhabiting the region for at least 5,000 years. In its heyday, it was an intellectual hotspot of the Islamic world, if the number of gorgeously constructed mosques and madrassas doesn’t give it away. 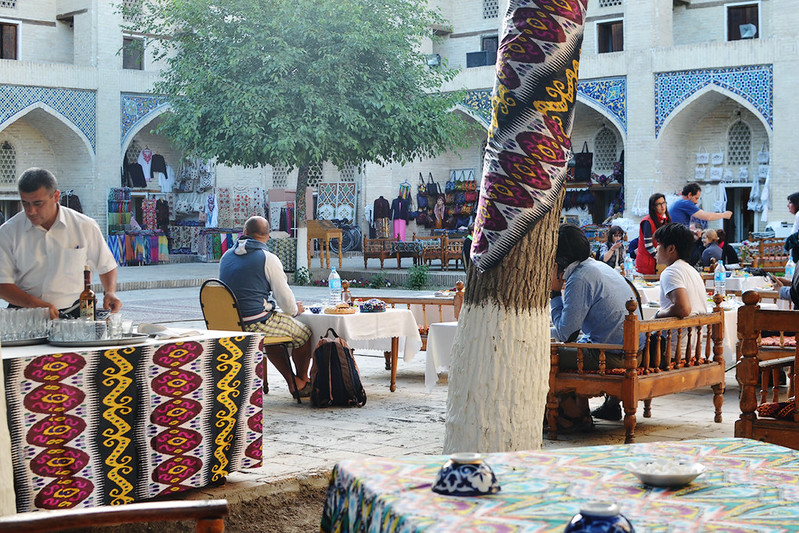 For all its renown both past and present, Bukhara is a city so quiet that it could pass as a ghost town, and you’d be hard-pressed to find a lot of bustle, even in the city center. The overall vibe is switched down a notch or two, and you’ll find most of the crowds peak around the afternoon, when all the families gather, but even so, the city never quite reaches critical mass. There are markets where you must bargain to avoid feeling like you’re getting ripped off, but none of the loud, squawking haggling. There are beautiful mosques and minarets that beg for photos (and, yes, selfies), yet you won’t find any tourists trying to finagle a GoPro here. Many of the domed bazaars are left open and waiting for you to wander in. Everything can be explored easily (and quite comfortably!) by foot, and vehicles are an uncommon sight.

Maybe it was the lack of people that made me pay more attention to minute things like the weather, but of all the places I hit up during my Central Asia trip, Bukhara was the one city where it was obvious that we were in a desert and gosh, was it balls hot. Even in mid-May, the bulk of Central Asia adopts a sweltering summer-like weather that’s a far cry from the coldness people typically expect from former Soviet republics. 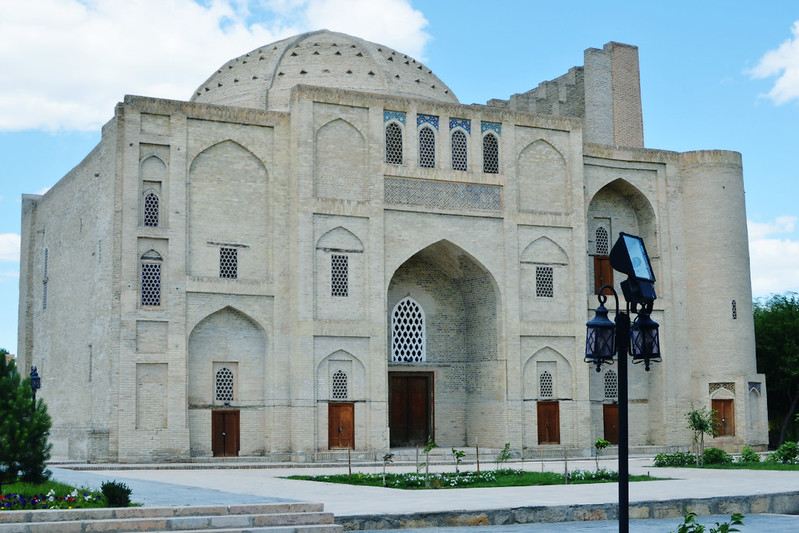 The first day was spent traipsing around the Po-i-Kalyan Complex, famous for the triple Ms: madrasa, minaret, and mosque. 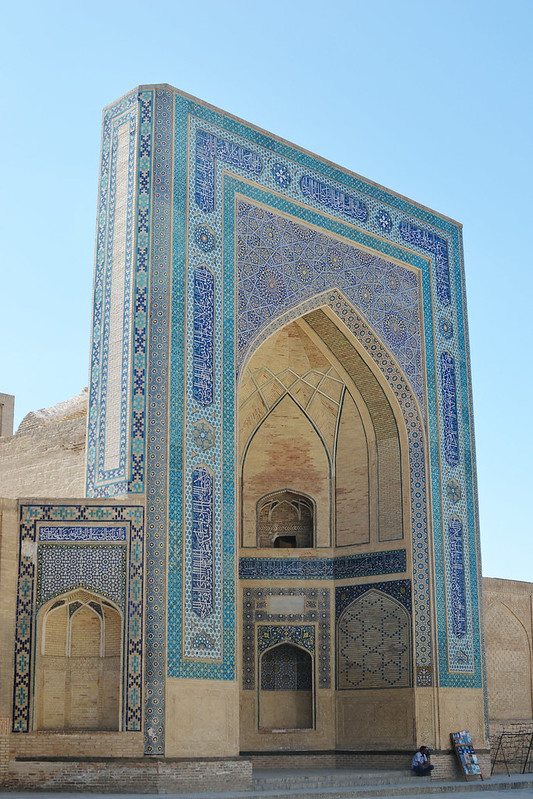 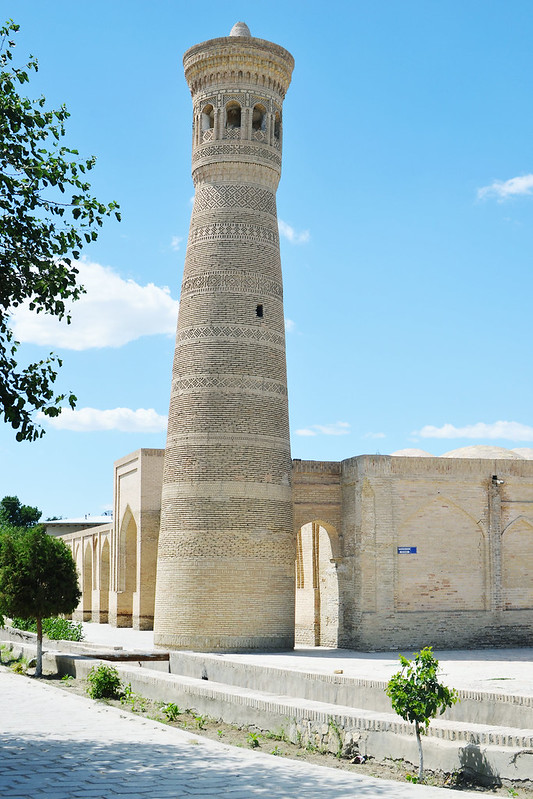 Legend has it that Genghis Khan found the Kalyan minaret (above) so impressive, that he ordered it to be spared while everything surrounding it was to be destroyed. 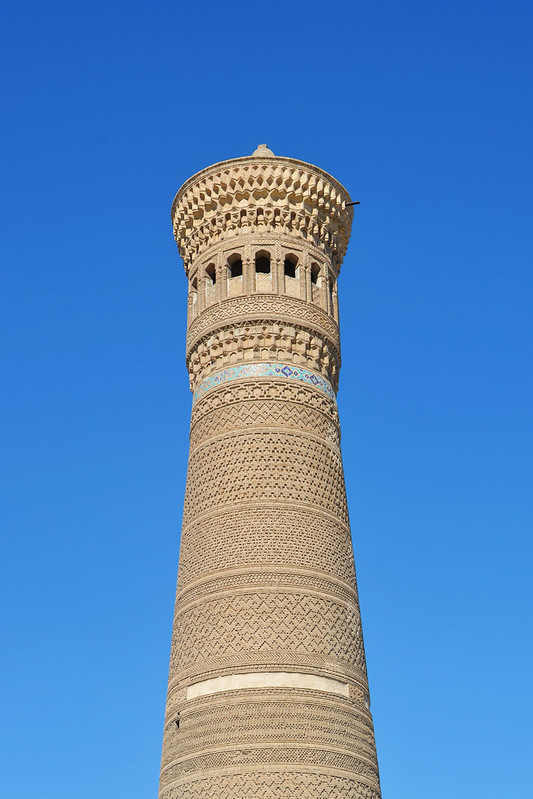 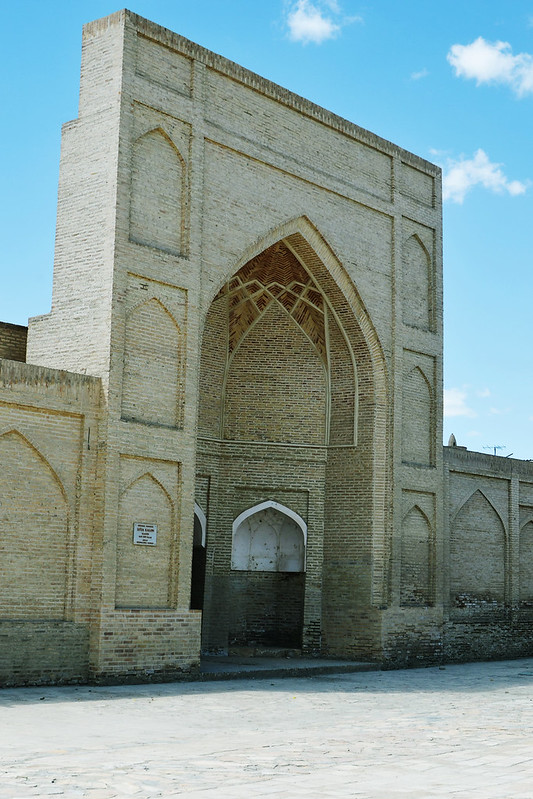 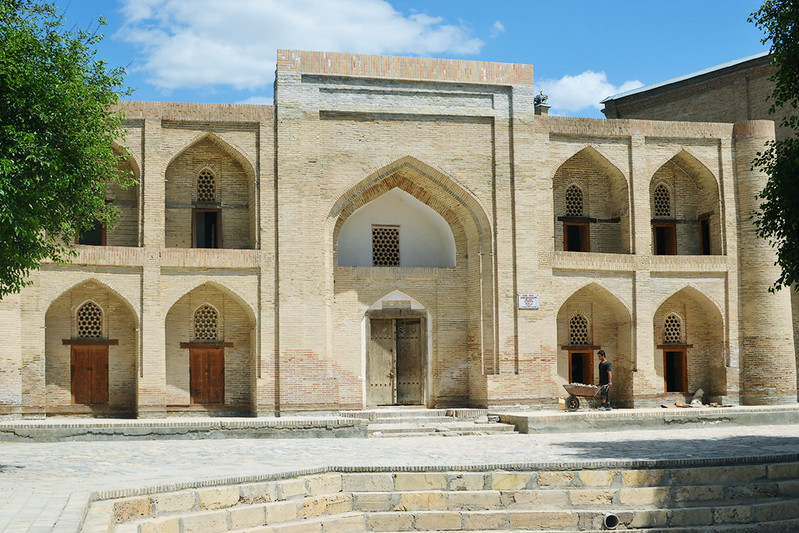 Come on, doesn’t that mosque courtyard look so freaking posh?! 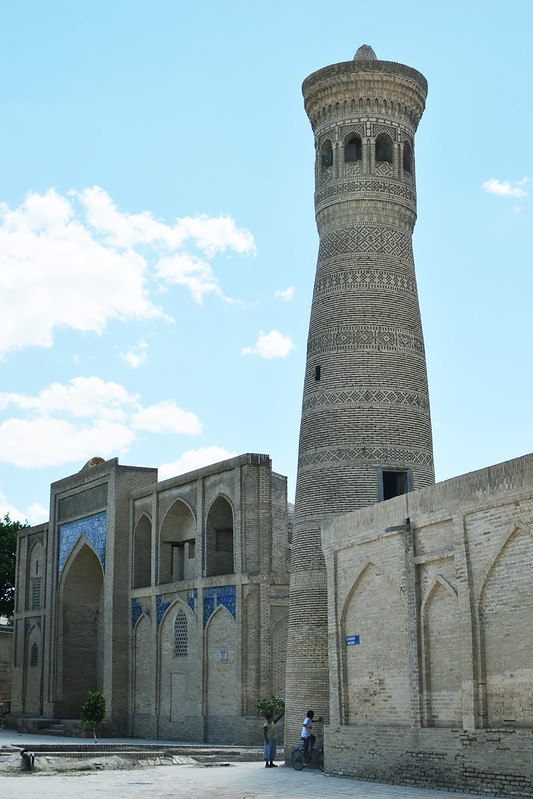 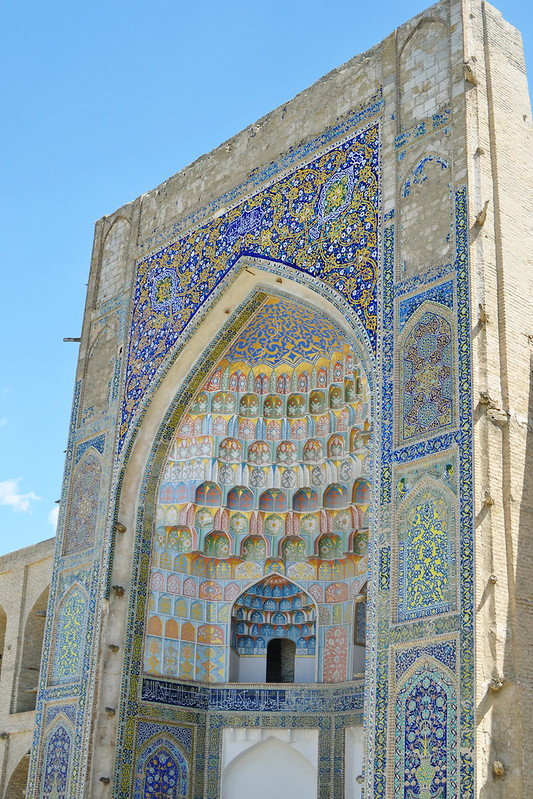 I can’t even begin to tell you how many detail shots I took of all the buildings here. Just look at them jewel tones. 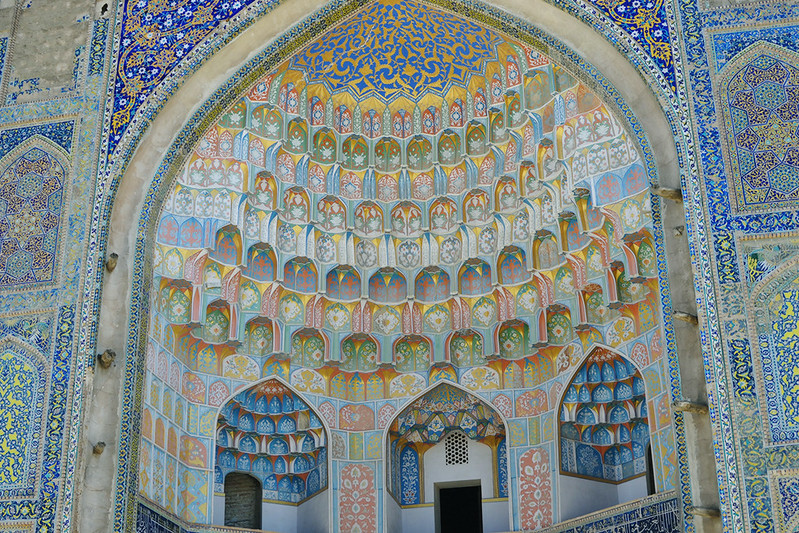 Bukhara isn’t really known for its pubcrawls; this bar near Lyabi-Hauz in particular felt absolutely deserted when we stopped in for a pint. But hey, more Baltika for us! And pistachios! And that infamous kurut that I thought I had left behind in Kyrgyzstan! 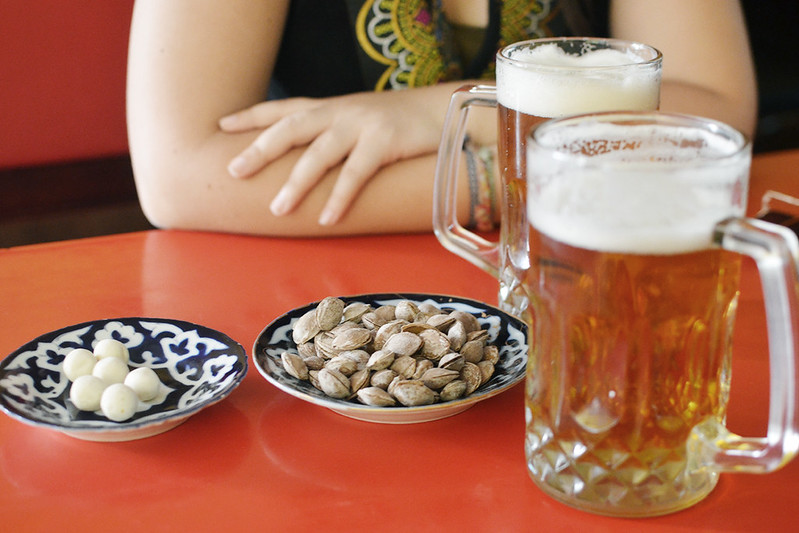 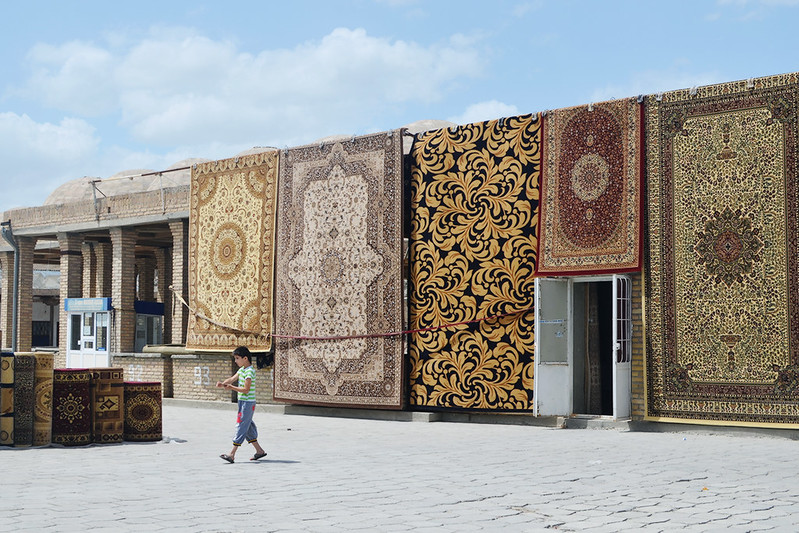 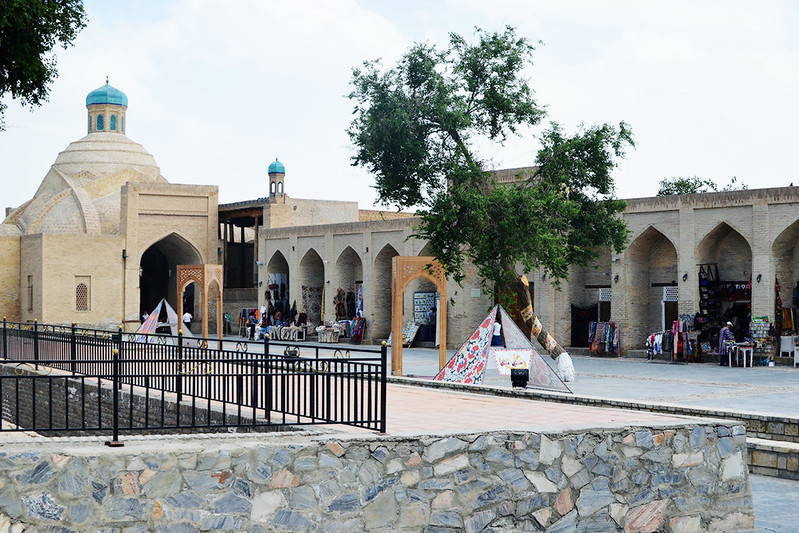 Snacks were had at the Silk Road Tea House, where we spent the better part of a lazy May afternoon reading while sipping saffron and ginger teas. Pumpkin spice lattes did not belong here. 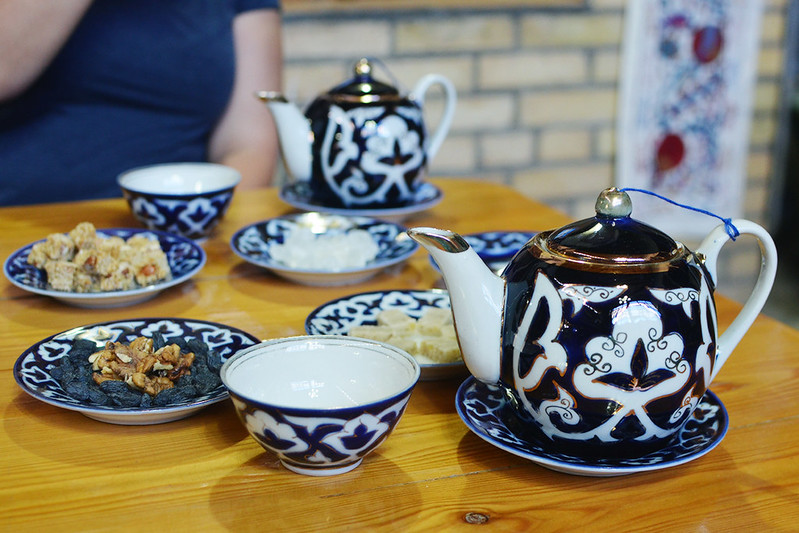 Overall, our stay in Bukhara was slow, but the easy, relaxing kind of slow where you don’t feel pressured to visit Tourist Destination #2958394. Uzbekistan doesn’t have that fast-paced life that tends to dictate a lot of tourist-centric travel. Maybe it was already enough that we were in a place that felt like it had been directly culled from 15th century — either way, it was a lovely balance between something new and something relaxing, especially after spending time in bigger cities and, well, a yurt. 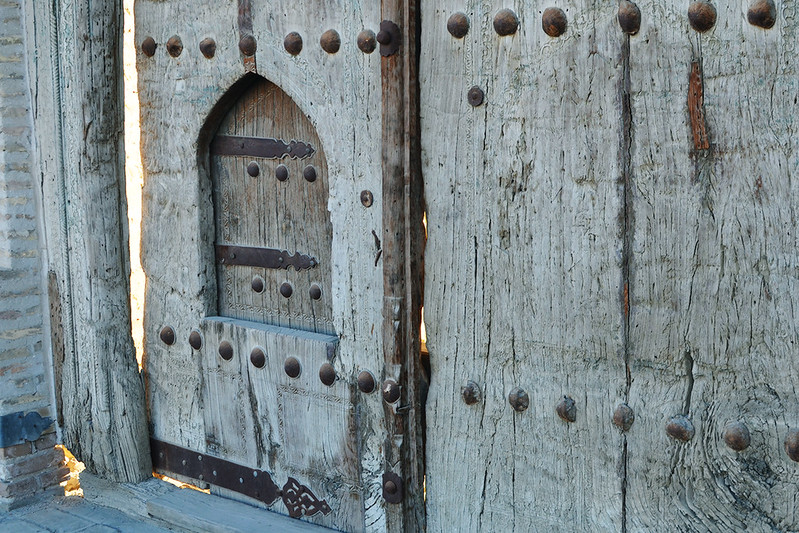 i keep forgetting it's december 🤷🏻‍♀️